A wide range of stakeholders is involved in the provision of multiple-use water services. Understanding who these stakeholders are and their different roles and responsibilities is a crucial starting point in understanding where improvements can be made in MUS. This tool helps stakeholders to identify the most important roles and linkages. It aids them in identifying and visualising tasks related to the provision of water services, allowing the key coordinating linkages to be seen in relations between the different stakeholders and their tasks.

Actor and task analysis can be carried out both in workshops and by using other approaches such as semi-structured interviews. However, at some point it is important that relevant stakeholders are able to see the totality of the analysis being developed – and to understand and discuss their roles within it.

The main framework used for the analysis is the actors and tasks matrix (see Table 16 for an example). Each row represents a different actor involved in the water system, while each column identifies a key task and role.

The matrix is filled in based on discussions with stakeholders in workshops or interviews. The matrix then reveals information about gaps and overlaps in relation to essential tasks and the actors who perform them.

A number of guiding questions can be used in either workshops or interviews to prompt stakeholders, these include: 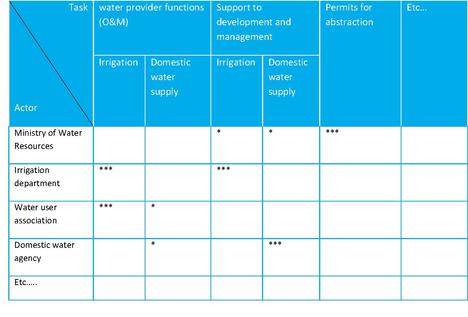 Source: Based on Moriarty, et al., 2007
Note: Stars represent the relative importance of the role.

Adapted from the RAAKS (rapid appraisal of agricultural knowledge systems) toolbox (tool B5). Available at:  http://www.kit.nl/smartsite.shtml?ch=FAB&id=4616&Part=Resources.

Toolkit For Planning and Provision

See all the tools in our toolkit